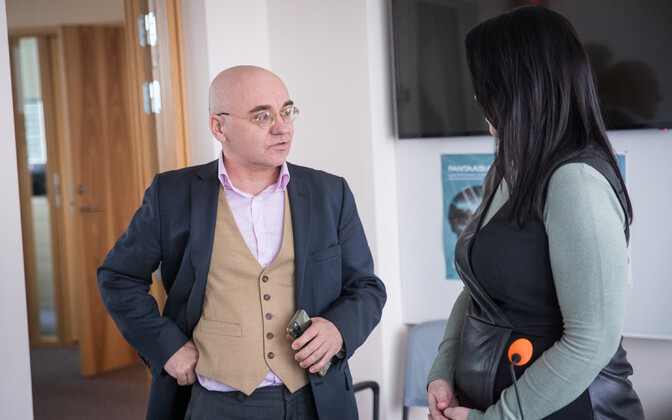 Speaking to Vikerraadio’s morning show “Vikerhommik” on Tuesday morning, Roose said he had already applied to the Ministry of Culture in September 2021 for additional funding, anticipating soaring energy costs.

The whole cultural sector needs more funding, not just the ERR, Roose added, expressing skepticism about claims by some politicians that Estonia is among the top three countries in Europe in terms of spending cultural.

“We compared the state budgets of the last 25 years. It turned out that the budget of the Ministry of Culture has almost doubled since then. The point of view [however] that Estonia holds the record for cultural spending in Europe, I sincerely doubt that,” he told “Vikerrhommik” presenters Toomas Luhats and Erle Loonurm.

“When we spend so little money on culture, is it any wonder that, for example, social debate itself has become so uncultivated,” he added.

As for how efficiently ERR uses the funds allocated to it, Roose said that even the broadcaster’s most serious political critics would understand that everything was done efficiently, with internal and external audits and checks, and would have to admit that more money was needed.

“We are running a Europe-wide experiment on the reliability and cheapness of broadcasting. The €4.5 each taxpayer pays every year through the state budget provides the best service you can buy in terms of media, with five radio stations, four television channels and portals in three languages,” he said.

Funding among the lowest in Europe as a proportion of GDP

The average funding for public media services at European level is 0.18% of GDP, with a range between 0.1 and 0.3%.

While Estonia had a higher figure than 30 years ago, at 0.41% of GDP, Roose said, that has since followed at 0.12%, i.e. lower end of the range and below the European average.

Roose also refuted claims by Eesti Päevaleht (EPL) and Delfi editor Urmas Soonvald that the budgets of his organisation, the Ekspress Group, and those of its main private sector rival, the Postimees Group, were lower than those in the ERR – a situation that is the reverse of that in Finland, said Soonvald.

“With the help of colleagues, we have verified the turnover of competitors and this statement [from Soonvald] it is not true. The figure was more than 60 million euros for the Ekspress group and 35 million euros for the Postimees group, minus the television channels. These amounts are most likely higher than ERR’s base budget,” Roose said.

At the same time, ERR enjoys its highest public rating for reliability in the past six years, with 74% of the public trusting the public broadcaster as their news source, he said.

Private media and many other taxpayer-funded organizations are lagging behind, Roose noted.

Roose rejected the proposal to air advertising on ERR channels, with the possible exception of Russian-language TV channel ETV+, which he said could be considered.

“Naturally, I would be cautious about setting a precedent. But hypothetically, if our major telecommunications companies stopped buying advertising space on Kremlin-funded channels and were faced with the question of how to s to address Russian audiences with their commercial offerings, ETV+ could be considered in some context,” Roose said.

The websites and print media of Ekspress Group and Postimees Group broadcast advertising, as does the latter’s television channel, Kanal 2.

The TV3 commercial channel is owned by Viasat, while the evening newspaper Õhtuleht also broadcasts online and print advertisements.

Roose: Private media moguls not helping their own situation by attacking ERR

Roose also expressed bewilderment as to why commercial media moguls had recently begun dispensing management advice to the public broadcaster.

“It brings me a bit of warm nostalgia,” said Roose, who in the past has worked as a manager with both the Ekspress band and the Postimees band.

“While I was working as a private media manager, I don’t remember ever wanting to give talks [previous ERR managing director Margus] Allikmaa, [former ETV managing directors Ilmar] Raag or [Hagi] Shein. We spent time on our publications, not teaching colleagues, and the print runs were even higher,” he continued, noting that the attacks were particularly disconcerting given that private media companies have recently made regularly review their performance.

“I see it’s not fair competition. But attacking the national broadcaster doesn’t help,” he said.

The occasional calls for the ERR to be disbanded altogether must be seen in light of the absence of the service provided by the public broadcaster, Roose said, and the void that would remain if that were to happen.

For example, if the flagship 9 p.m. show “Aktuaalne kaamera” was no more, Roose said, “I believe a lot of people who live in the center of Tallinn would go to Toompea to see what color flag is flying from the top of Pikk Hermann”, referring to the tower adjacent to Toompea Castle, seat of the Riigikogu, where the Estonian blue-black-white is hoisted and lowered each day at dawn and dusk.

Roose added that even if the ERR has even one more cameraman or director than the private media, that’s the price to pay to ensure continuity.

“We are already the most efficient national broadcaster in Europe. And my colleagues often ask me how this is possible and if I could come and teach them how to deliver such reliable journalism on such a tight budget.”

Like any organization, large or small, and with individuals, ERR is facing large electricity bills this winter and had to cut a few minutes from the airing time of a particular program as a cost-cutting measure, the Delfi portal (see above) reported last week (link in Estonian). Delfi also claims that this is only the first of various such measures.

The Estonian National Opera (Rahvusooper), for example, falls under the Ministry of Culture and employs a comparable number of staff to the ERR (well over 600), while sport also falls under the purview of the ministry.

Erik Roose became chairman of the ERR board in 2017, serving a five-year term, replacing Margus Allikmaa, who served two terms as chairman from 2007 to 2017.

The broadcaster was established in 2007 by a legal act and as a result of the merger of the former ETV and Estonian Radio.

It operates two TV channels in Estonian and one in Russian, ETV+.

The radio channels are Vikerradio, Raadio 2, Klassikaraadio (all in Estonian), Raadio 4 (in Russian) and Raadio Tallinn (in Estonian and which broadcasts BBC and RFI content in English and French as well), while news, as well as several other portals including those covering culture, sport and science and education are provided in Estonian, as well as a news portal in Russian.

ERR also operates a streaming service, Jupiter, which offers a lot of content in English, especially from the UK, and with Estonian subtitles, making it a useful resource for those learning Estonian. The streaming channel for children is Lasteekraan.

ERR News, the English portal, was launched in August 2010.

In addition to the board of directors, made up of Roose, Riina Rõõmus, Urmas Oru and Joel Sarv, the broadcaster is overseen by an independent supervisory board, headed by Rein Weidemann and including one deputy from each of the (currently five) political parties represented. at Riigikogu.

You can read past interviews on the public-private sector interface with Erik Roose here and with Merle Viirmaa, head of the Estonian Association of Media Companies (EML), representing the private sector, here.